Around the 1870s, all water pipes used in Japan were imported from other countries. Gonshiro Kubota, the founder of Kubota, witnessed the outbreak of cholera and other water-borne infectious diseases, and in 1893 the company began producing the first domestic cast iron water pipes. This established Kubota’s position as Japan’s leading manufacturer of iron pipes. Since then, in response to the changing needs of the times, Kubota has continued to lead the industry in development of durable materials, coupling joints and construction methods. In recent years, Kubota has completed the GENEX (next-generation) earthquake-resistant ductile iron pipes for water pipelines with outstanding long-term durability. Here are some of the water pipeline technologies from Kubota that have truly worked underground to support Japan’s water infrastructure.

The coverage of water supply in Japan is about 98% (as of 2017)1, but most of this consists of water pipelines laid during the period of high economic growth. Renewal of the aging pipes that have exceeded their 40-year legal lifespan has already become an urgent issue. On the other hand, due to stagnant revenues from water services, the national pipeline renewal rate is currently only about 0.7% per year. That is why Japan’s Ministry of Health, Labour and Welfare, which has jurisdiction over water services, has made the renewal and seismic resistance of water pipes its top priority, and is working toward its goal of 100% earthquake resistance for main pipelines.

Soon after, the 1968 Tokachi-oki earthquake occurred, this time with a magnitude of 8.3. The water department of Hachinohe City, Aomori Prefecture made an urgent request for the development of an earthquake-resistant joint that would not slip out of place, could bend in all directions, and would not leak. This was the push that launched the full-scale effort to develop such joints.

Taking into consideration factors such as estimated range of ground strain, amount of expansion/contraction, allowable deflection, and pullout resistance the engineers conducted interviews with Japan Society of Civil Engineers members and specialist university professors in order to determine the baseline criteria.

As a result of this, the engineers developed an original self-anchoring flexible mechanism that provides a certain amount of clearance in the pipe joint portion allowing it to extend, contract and deflect, and keeping it from pulling out if the pipe moves beyond the joint’s range of motion. This resulted in pipelines with dramatically improved adaptability to ground movements that could withstand major ground deformation. Because the joints work like a chain, so that each one can move without the whole system falling apart, the engineers gave it the name “chain structure pipeline.” And this structure was inherited by GENEX, one of Kubota’s main products today.

Of course, the manufacturing department at the time was said to have faced numerous difficulties and obstacles in the process of creating the world’s first earthquake-resistant pipes.

For example, after the SII-type for use in small-diameter applications, the NS-type, the first push-on type earthquake-resistant joint, was developed in 1994. This joint can simply be pushed on and does not require bolts or nuts at the jointing areas, giving it excellent workability. This succeeded in reducing the total cost of materials, construction and other expenses compared to conventional jointing methods, in which workers had to go down into trenches and joint the pipes with nuts and bolts. This led to a greater proliferation of earthquake-resistant pipes.

The fact that nearly 60% of the water pipelines currently in use in Japan (including plastic pipes) are made from Kubota Group materials is a testimony to the company’s achievements.

Developing GENEX, the pipes with an expected for 100 years of durability

In 2010, one year before the Great East Japan Earthquake, Kubota succeeded in its long-awaited development of GENEX, a new earthquake-resistant ductile iron pipe. GENEX is the latest model that carries on the earthquake-resistant performance of S-type pipes with outstanding workability and an expected lifespan of 100 years. Behind this project was the growing need from waterworks departments for earthquake-resistant pipelines that could last a long time.

Kubota spent dozens of years collecting more than 3,000 soil samples from pipe installation sites nationwide, along with valuable data analyzing the corrosion rate of iron pipes. In order to ensure a long lifespan, the most challenging aspect of water pipes, Kubota engineers made a “nationwide map of soil environments” based on this data. They quantified degrees of corrosion in underground environments covering about 95% of Japan’s national area excluding mountainous regions, and through a series of accelerating tests using actual pipes they compiled external corrosion specifications that could provide an expected 100 years of use.

This method offers a dramatic improvement in workability over the conventional method, in which a thin film called a polyethylene sleeve is used to cover the iron pipe where it is buried. Plus, the new method eliminates concern about shorter pipe lifespans resulting from damage during burial, making it an unprecedented development. This achievement demonstrates the “ductile iron pipe R&D spirit” handed down from Kubota’s founder, as well as the sense of pride and responsibility that Kubota feels in contributing to the construction of Japan’s water supply system as the leading manufacturer of ductile iron pipes.

These earthquake-resistant pipes were adopted on a trial basis in Los Angeles, U.S. in 2012. The Los Angeles Department of Water and Power took note of the pipes’ track record of resisting damage during the Kobe and East Japan earthquakes. The first overseas project using GENEX was around several hundred meters in length, but Kubota engineers provided full-scale support from pipe design to on-site supervision of jointing work during installation. This has led to a steady increase in the use of Kubota earthquake-resistant ductile iron pipes along the U.S. West Coast, a region that experiences frequent earthquakes. 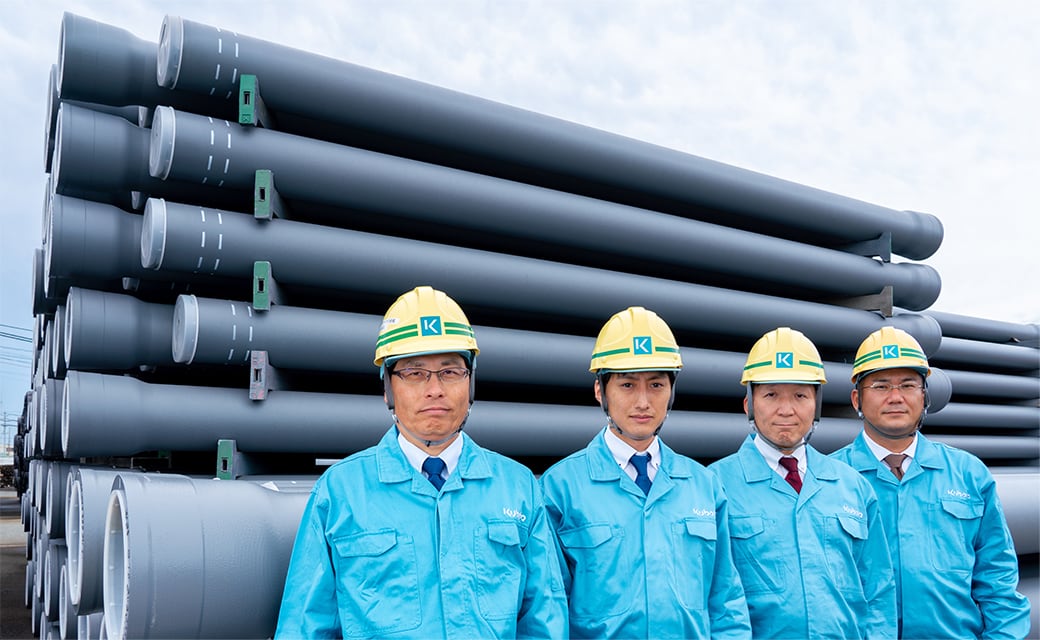 In addition to earthquakes, other large-scale natural disasters such as landslides caused by heavy rain have been occurring with greater frequency in recent years. Our mission is to build stronger, more dependable water pipelines that can deliver water to taps at all times. To make this possible, we will always listen closely to our customers and to those in the field, and we will keep researching and
developing iron pipes in anticipation of future needs. Local waterworks bureaus in Japan face a variety of challenges, including tighter budgets, a shortage of engineers, and greater volumes of projects. We will address these problems by actively pursuing research and development of new technologies and products using IoT to improve the productivity of waterworks. 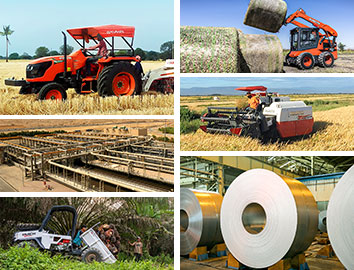