Throughout its history, Osaka has been surrounded by water – canals, rivers, and the seashore.
Here are some ways Kubota’s water environment business is helping the city fulfill its goals for sustainable urban management.

How can we build sustainable water infrastructure in urban areas?

Osaka, the largest city in western Japan, is also known as the "city of water. At one time, the city's waterways were a major part of residents' daily lives.
Today, Osaka is facing an increasing number of issues that need addressing if it is to maintain its sustainability. One of these issues is the rebuilding of its water infrastructure.
How can we conserve the city's water environment and restore liveliness to the waterfront all within the city's constraints? Kubota has found a way to help Osaka tackle these challenges and set an example for cities around the world.

MBR is used not only in sewage plants,
but also in business facilities,
as it helps to restore and recycle wastewater.

The Kubota MBR system is an advanced technology unique to Kubota that works tirelessly to purify water while taking into account the challenges and restrictions of urban development, and is sure to aid in the realization of a sustainable society.

From Osaka to the world.

*The titles of the people interviewed are as of 2020.

Kubota Corporation manufactured Japan’s first cast iron water pipes in 1893. Today, it is a comprehensive manufacturer of water-related equipment ranging from waterworks to sewage treatment, contributing to water infrastructure development in more than 70 countries worldwide. Its water environment business was launched in 1962 at a time of growing concern about the social costs of water and environmental pollution caused by Japan’s rapid economic growth. It has been involved in water treatment projects in Japan as well as countries and territories throughout Asia and the rest of the world.
MBR, which combines the Submerged Membrane Unit® developed by Kubota with a biological treatment process, offers advanced treatment quality in a compact footprint. This technology has been introduced at sewage treatment facilities inside and outside Japan, along with numerous industrial wastewater applications including food factories. It continues to gain popularity throughout the world today. 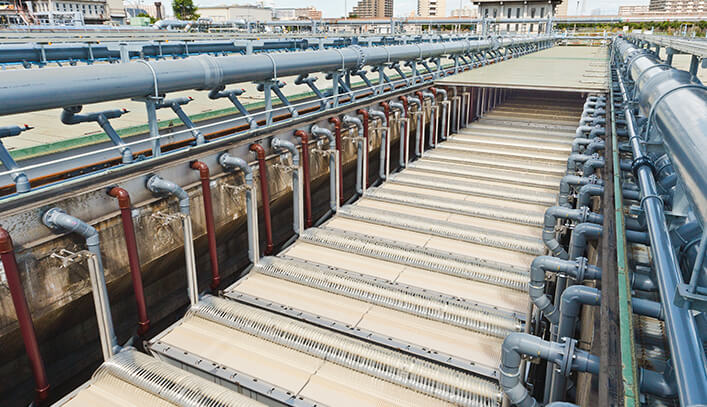